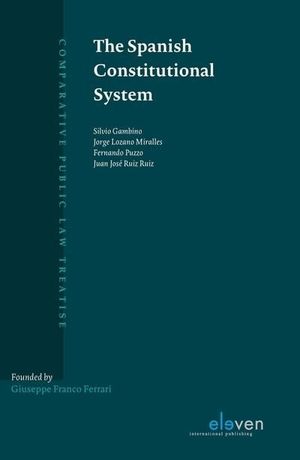 After the authoritarian regime of General Franco, the Constitution of 1978 established a new constitutional system in Spain which stands as a concrete political reality and as a compendium of European constitutional history of the end of the twentieth century. After a brief historical introduction, the text deals critically, and with some comparative aspects, with the value system on which the Constitution is founded (the Social and Democratic State of Law), the relative sources of law, fundamental rights and their guarantees, the regulating of the constitutional organization of the State (Parliament, Government, Crown, Judiciary power and Constitutional Court) and the forms of territorial distribution of power, the problems raised by relations between the State and the Autonomous Communities, particularly with regard to their financing. The book, written by jurists, is a useful tool of knowledge for those who want to study the problems posed by the Spanish political-constitutional reality. To this end, after the systematic study of the fundamental rules of the constitutional order, the book examines its implementation, not neglecting the sovereign pretensions of some territories of the country.