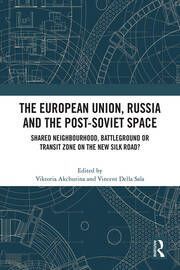 THE EUROPEAN UNION, RUSSIA AND THE POST-SOVIET SPACE

This book is an exploration of how the European Union (EU) and other regional actors construct, understand and use different forms of power in a political space that is increasingly referred to as Greater Eurasia. The contributors examine the extent that the understanding of power shapes how states and the EU act on a range of questions from energy to the balance of power in Eurasia. They explore how the EU's and other regional actors', primarily Russia's, understanding of power determines whether the post-Soviet space is a neighbourhood, a battleground or an arena for geopolitical and geostrategic confrontation. The chapters deal with a range of issues from negotiations between the EU and Azerbaijan, to how the EU and Russia are trying to shape relations in Central Asia. The volume represents an innovative way of understanding the changing dynamics of the relationship between Russia and the EU, with some original empirical data, and presents these dynamics within a broader conceptual and geographic framework. It also contributes to emerging debates about how the ideational construction of political space may provide insight into how actors behave. The chapters in this book were originally published as a special issue of the journal Europe-Asia Studies.