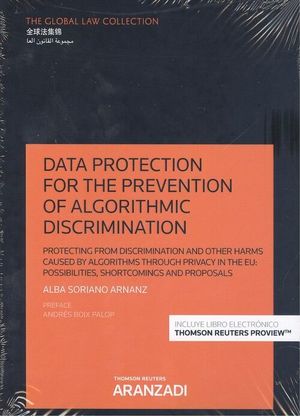 DATA PROTECTION FOR THE PREVENTION OF ALGORITHMIC DISCRIMINATION

The development of digital technologies, capable of analysing massive amounts of data, has led to the widespread implementation of data processing technologies and automated decision-making processes in many areas of human activity. Over the past few years, it has become increasingly apparent that these tools can cause significant harms to the fundamental rights of individuals as well as to other basic values and principles which constitute the very foundation of Western democracies. Most of the legal scholarship and regulators have thus far focused on privacy protection legal instruments as the main mechanisms through which to protect individuals and democratic values against the harms and risks caused by automated data processing and decision-making systems.
This book focuses on analysing how the EU data protection and US privacy protection frameworks are structured and can work in order to prevent and deal, in particular, with algorithmic discrimination, but also other issues of concern, such as automated system opacity. In doing so, the shortcomings of privacy-based protection systems in addressing some of risks and harms caused by data processing and decision-making technologies are also established. Finally, the book also draws a series of regulatory proposals aimed towards effectively addressing the concerns and problems that arise from the growing implementation of automated data processing and decision-making systems.