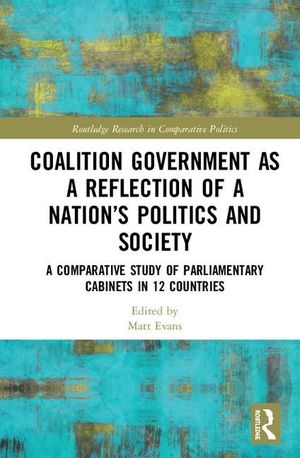 COALITION GOVERNMENT AS A REFLECTION OF A NATIONS POLITICS AND SOCIETY:

A COMPARATIVE STUDY OF PARLIAMENTARY PARTIES AND CABINETS IN 12 COUNTRIES

Through examination of parliamentary governments in twelve countries, this book demonstrates the ways in which study of the parties in governing coalitions, and their parliamentary opposition, provides insight into numerous aspects of countries cultural values, societal schisms, and the issues of greatest contention among their people.
Each chapter analyses the political parties in a different countrys parliament and illustrates how they represent the countrys competing interests, social divisions, and public policy debates. Coalition and opposition parties are also shown to reflect each countrys: political institutions; political actors; political culture; and societal, geographic, and ideological rifts. In many of the countries, changes in the constellation of parties in government are emblematic of important political, social, and economic changes.
This book will be essential reading for students of parliamentary government, political parties, electoral politics, and, more broadly, comparative politics.