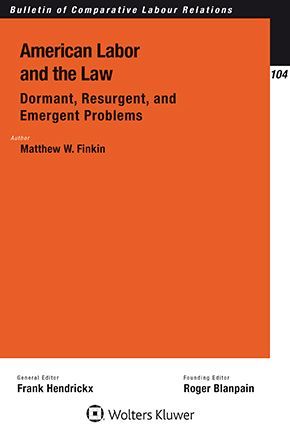 AMERICAN LABOR AND THE LAW: DORMANT, RESURGENT, AND EMERGENT PROBLEMS

American Labor and the Law presents a detailed analysis of the labor problem in the United States from the struggles of the nineteenth century to the solutions of the twentieth century, and the resurfacing of problems in the twenty-first century. In the United States and worldwide, the labor question has recrudesced. Old issues have resurged, sometimes in altered guise. New issues have emerged. Both test the twentieth centurys solutions. This work explores the arc of labor law in the United States from the past-Revolutionary period to the present. It tracks the changes that have reordered business and employment at the centurys turnthe resurgence of old issues in new dress and the emergence of new issues, of which the deployment of technologiesrobotization and computerizationhas been the catalyst. It closes on the issues labor law is facing in the twenty-first century, including the imponderable of yet a new need to address the definition of citizenship.