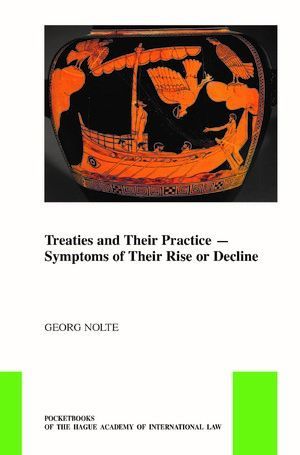 TREATIES AND THEIR PRACTICE

SYMPTOMS OF THEIR RISE OR DECLINE

The book describes the development of certain important treaties from the perspective of their practice, with a view to assessing whether these treaties are, or have been, on the "rise" or in "decline". Following a glance at major European peace treaties prior to the UN Charter, the book focuses on developments over the last thirty years with respect to the UN Charter and its rules on the use of force, human rights treaties, the WTO agreements, investment treaties, and environmental treaties. It looks at these treaties from the perspective of an observer as well as from the perspective of a practitioner who is called to apply a treaty, taking into account the rules of interpretation under the Vienna Convention on the Law of Treaties. The book describes, in particular, how the International Law Commission has elucidated the significance of the rules of interpretation in its conclusions on "Subsequent agreements and subsequent practice in relation to the interpretation of treaties" (2018), and it connects this work with the broader developments.