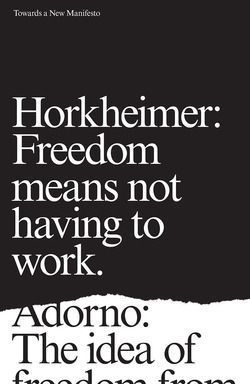 TOWARDS A NEW MANIFESTO

Towards a New Manifesto shows Theodor Adorno and Max Horkheimer in a uniquely spirited and free-flowing exchange of ideas. This book is a record of their discussions over three weeks in the spring of 1956, recorded with a view to the production of a contemporary version of The Communist Manifesto. A philosophical jam-session in which the two thinkers improvise freely, often wildly, on central themes of their worktheory and practice, labour and leisure, domination and freedomin a political register found nowhere else in their writing. A thrilling example of philosophy in action and a compelling map of a possible passage to a new world.