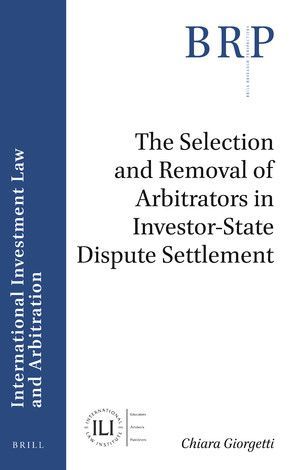 THE SELECTION AND REMOVAL OF ARBITRATORS IN INVESTOR-STATE DISPUTE SETTLEMENT

The Selection and Removal of Arbitrators in Investor-State Dispute Settlement explores and assesses two essential features in investor-state dispute resolution (ISDS): the selection and the removal of arbitrators. Both topics have received increasing scrutiny and criticism, that have in turn generated calls for reforms In its first part, the author, Chiara Giorgetti, explains the selection of arbitrators procedurally and comparatively under the most-often used arbitration rules. The work then reviews critically the necessary and desirable qualities arbitrators need for selection and appointment, and addresses some important and related policy issues, such diversity and repeat appointments. It also includes an assessment of the calls to review the methodologies used to appoint arbitrators, and specifically the proposal by the European Commission to create a permanent tribunal to resolve international investment disputes, the UNCITRAL Working Groups III Reform Process and the rules amendment proposal undertaken by the Secretariat of the International Center for Settlement of Investment Disputes (ICSID Secretariat). In its second part, the book addresses removing and challenging arbitrators and reviews first the applicable provisions, under a variety of arbitration rules, to remove arbitrators who fail to possess the necessary qualities to sit in arbitral proceedings, and then evaluates the reasons for challenge and some important cases that addressed challenges. The monograph assesses appointments and removals in a multifaceted and comprehensive way, and includes a critical assessment of the reasons and calls for reform of the ISDS system.