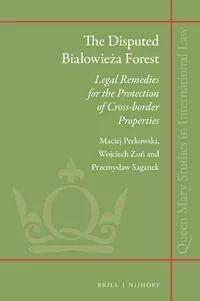 LEGAL REMEDIES FOR THE PROTECTION OF CROSS-BORDER PROPERTIES

"Bialowieza Forest [Puszcza Bialowieska] is a large forest complex, situated on the border between Poland and Belarus. As a UNESCO World Heritage site, it covers an area of 141,885 hectares on both sides of the border, with a greater part located in the territory of Belarus. The buffer zone of the site was designated on an area of 166,708 hectares. In total, this is an area of 308,593 hectares. It is considered the last primeval forest in Europe. As Rafal Paluch notes, its uniqueness and special character on a European scale results, inter alia, from preserving a great diversity of life forms, the presence of natural forest ecosystems and ecological connections between their specific components; its greatest natural value is the components and features constituting relics of a natural forest"-