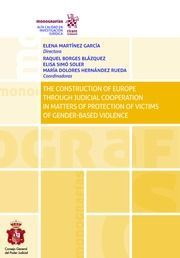 THE CONSTRUCTION OF EUROPE TROUGH JUDICIAL COOPERATION IN MATTERS OF PROTECTION

The world´s multipolar geopolitical configuration, the crisis of the economic system, the presence of neoconservative approaches in parliaments or the crisis of refugees are some of the factors that have defined a new stage in the history of the European Union. This scenario is combined with the inherent diversity of the European Union, a set of sovereign cultural, legal and sociological identities and realities. Thus, in this context the Directive 2011/99/EU on the Europeanprotection order arises with the aim of Creating Europe through Equality, Freedom and Judicial Cooperation civil and criminal. Judicial cooperation between European States shows us the limits of the European Union. Not only the European legislator finds these limits, but also national judges. Different legal systems complicate mutual recognition and without mutual recognition the Space of Freedom, Security and Justice cannot guarantee the security of its citizens. Moreover, we cannot speak of real Justice if victims do not have freedom to move around the European Union. Gender violence victims find another problem: the non-existence of a gender concept in the European Union. Taking all these facts into account, we firmly believe that we must continue creating a real European Union in order to fight against violence. Within this work we study the Directive 2011/99/EU on the European Protection Order contextualized with the surprising data that the European Union has about gender equality.