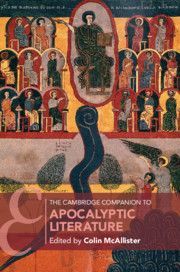 THE CAMBRIDGE COMPANION TO APOCALYPTIC LITERATURE

1. Through a glass darkly: time, the end, and the essence of apocalyptica Colin McAllister
2. Apocalpyticism as a worldview in ancient Judaism and Christianity John J. Collins
3. Introduction to the Book of Revelation Ian Paul
4. The gnostic apocalypses Dylan M. Burns
5. Exegetic the apocalypse with the Donatist communion Jesse A. Hoover
6. Tests of faith, rebirth out of corruption or endless cycles of regeneration: experiments in the restoration of the late Roman Empire Brian Duvick
7. Latin reception of the apocalypse in the early Middle Ages E. Ann Matter
8. Exegesis of the Apocalypse in the tenth century Francis X. Gumerlock
9. The end of the world at the ends of the Earth: apocalyptic thought in medieval Ireland John Carey
10. Byzantine apocalyptic literature András Kraft
11. Joachim of Fiore and the apocalyptic revival of the twelfth century Brett Edward Whalen
12. Apocalpytic sensibility in renaissance Europe Ian Boxall
13. 'Pride and vanity of the imagination, that disdains to follow this world's fashion': apocalypticism in the age of reason Christopher Rowland
14. The formation of antichrist in medieval western Christian thought Kevin L. Hughes
15. From Dabiq to Jerusalem: trajectories of contemporary Salafi-Jihadi apocalypticism David Cook
16. American evangelicals and the apocalypse Daniel G. Hummel
17. Apocalypticism in the contemporary world Lorenzo DiTommaso.

Jewish and Christian apocalypses have captivated theologians, writers, artists, and the general public for centuries, and have had a profound influence on world history from their initial production by persecuted Jews during the second century BCE, to the birth of Christianity - through the demise of the Western Roman Empire and the medieval period, and continuing into modernity. Far from being an outlier concern, or an academic one that may be relegated to the dustbin of history, apocalyptic thinking is ubiquitous and continues to inform nearly all aspects of modern-day life. It addresses universal human concerns: the search for identity and belonging, speculation about the future, and (for some) a blueprint that provides meaning and structure to a seemingly chaotic world. The Cambridge Companion to Apocalyptic Literature brings together a field of leading experts to provide a comprehensive overview of the subject...