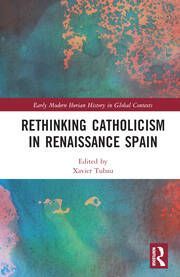 Rethinking Catholicism in Renaissance Spain claims that theology and canon law were decisive for shaping ideas, debates and decisions about key political and religious problems in Renaissance Spain.This book studies Catholic thought during the Spanish Renaissance, with the various contributors specifically exploring the ecclesiology and heresiology of the period. Today, these two subjects are considered to be strictly branches of theology, but at the time they were also dealt with in the field of canon law. Both ecclesiology, which studied the internal structure of the Church, and heresiology, which identified theological errors, played an important role in shaping ideas, debates and decisions concerning the major political and religious problems of the late medieval and early modern periods. In contrast to the conventional monolithic view of Spanish Catholic thought on ecclesiastical matters, the essays in this book demonstrate that there was a wide spectrum of ideas in the field of theology and canon law. The topics analyzed include Church and Crown relations, diplomatic controversies, doctrinal debates on slavery, ecclesiological disputes in dialogue with the Council of Trent, and theories for distinguishing heresies and repressing them. This book will be essential reading for those interested in disciplines such as Church history, political history, and the history of political and legal thought.