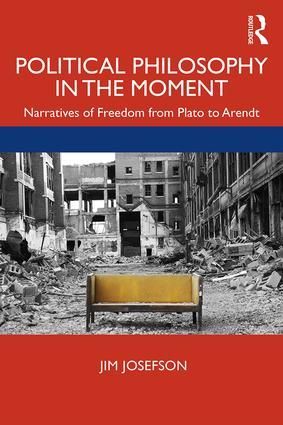 POLITICAL PHILOSOPHY IN THE MOMENT

NARRATIVES OF FREEDOM FROM PLATO TO ARENDT

Political Philosophy In the Moment uncovers the political power of narrative by both telling and explaining the stories that frame our ability to be "in the moment."
In a series of eleven short stories, Jim Josefson presents the history of political philosophy and Hannah Arendts alternative, an aesthetic form of politics. In the early stories, Josefson recounts how the four main traditions of political philosophy (Platonism, Aristotelianism, liberalism and historicism) promise truth but deny us the freedom available in reality. Then, he reviews the alternative narratives offered by thinkers like Kierkegaard, Nietzsche and Heidegger, which influenced Arendts view. The final chapters chart Arendts route back to the Moment, the freedom to read and tell a fuller story about the beauty and horrors that appear in the world.
A page-turning book of short stories and a tour through the greatest works of political philosophy, Political Philosophy In the Moment is as approachable, comprehensible and welcoming as a fairy-tale, ideally suited for students of contemporary political theory and anyone interested in political thought.