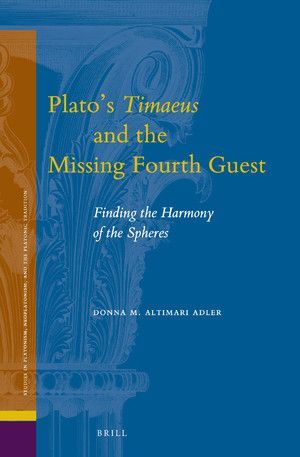 FINDING THE HARMONY OF THE SPHERES

In Plato's Timaeus and the Missing Fourth Guest, Donna M. Altimari Adler proposes a new Timaeus scale structure. She finds the harmonic cosmos in Plato's text, mathematically, regarding it as a number generator. Plato's primary number sequence, she argues, yields a matrix defining a sophisticated harmony of the spheres. She stresses the Decad as the pattern governing both human perception and the generation of all things, in the text, including the World Soul and musical scale symbolizing it. She precisely identifies Plato's "fabric" and its locus of severance and solves other thorny problems of interpretation, e.g., properly naming the sets of three and four bands, born of splitting the band of difference, and explaining their differing motions and speeds.