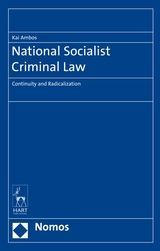 In line with theories of National Socialism as a continuation and radicalization of existing trends, this innovative study interprets Nazi criminal law as a racist (anti-Semitic), nationalist (Germanic), and totalitarian construct that continues and develops further the authoritarian and anti-liberal tendencies of German criminal law of the fin-de-siècle and the Weimar Republic. This is borne out by a systematic analysis of writings by relevant authors that focuses first and foremost on the texts, which speak for themselves, and is less concerned with morally judging the scholars who produced them. Furthermore, the study shares novel insights on the reception of German (National Socialist) criminal law in Latin America. The aforementioned continuity existed not only between the Nazi period and the eras preceding it, but also between National Socialism and the period that followed (the Bonn Republic). In short, National Socialist criminal law neither came out of nowhere nor disappeared completely after 1945. Current identitarian attempts by the so-called Neue Rechte (New Right) to reconstruct the Germanic myth represent yet another continuation that links seamlessly to National Socialist ideology.