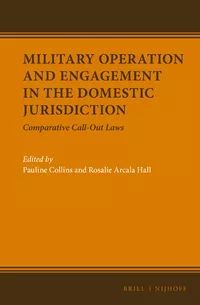 MILITARY OPERATION AND ENGAGEMENT IN THE DOMESTIC JURISDICTION

"This book scrutinises the call-out of the military in the domestic domain in a selection of 13 countries. Nation-states vary in their political-legal structures and all have their own history in the use of military personnel in domestic matters. Three recent events have resulted in increased domestic military deployment and have been experienced in most countries. In the security domain, there is the rise of Islamic State and increasing acts of terrorism, resulting in military involvement in policing. The other two have increased humanitarian needs: the COVID-19 pandemic and the widespread flooding and fires following the changes in climate. These have brought increasing military activity domestically, even in established democracies. This comparative analysis incorporates historical developments and provides a rich multidisciplinary approach from political and social scientists to lawyers and military personnel"-