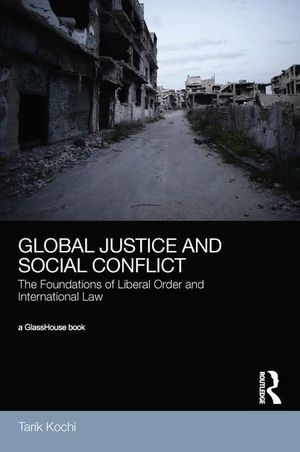 THE FOUNDATIONS OF LIBERAL ORDER AND INTERNATIONAL LAW

Global Justice and Social Conflict offers a ground-breaking historical and theoretical reappraisal of the ideas that underpin and sustain the global liberal order, international law and neoliberal rationality.
Across the 20th and 21st centuries, liberalism, and increasingly neoliberalism, have dominated the construction and shape of the global political order, the global economy and international law. For some, this development has been directed by a vision of global justice. Yet, for many, the world has been marked by a history and continued experience of injustice, inequality, indignity, insecurity, poverty and war  a reality in which attempts to realise an idea of justice cannot be detached from acts of violence and widespread social conflict. In this book Tarik Kochi argues that to think seriously about global justice we need to understand how both liberalism and neoliberalism have pushed aside rival ideas of social and economic justice in the name of private property, individualistic rights, state security and capitalist free markets. Ranging from ancient concepts of natural law and republican constitutionalism, to early modern ideas of natural rights and political economy, and to contemporary discourses of human rights, humanitarian war and global constitutionalism, Kochi shows how the key foundational elements of a now globalised political, economic and juridical tradition are constituted and continually beset by struggles over what counts as justice and over how to realise it. Engaging with a wide range of thinkers and reaching provocatively across a breadth of subject areas, Kochi investigates the roots of many globalised struggles over justice, human rights, democracy and equality, and offers an alternative constitutional understanding of the future of emancipatory politics and international law.