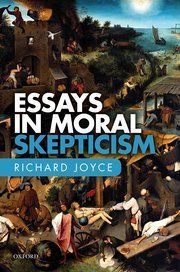 Moral skepticism is the denial that there is any such thing as moral knowledge. Some moral skeptics deny that moral judgments are beliefs; some allow that moral judgments are beliefs but claim that they are all untrue; others claim that all moral judgments are unjustified. Since the publication of The Myth of Morality in 2001, Richard Joyce has explored the terrain of moral skepticism and, perhaps more than any other living philosopher, has been willing to advocate versions of this radical view. Joyce's attitude toward morality is analogous to an atheist's attitude toward religion: he claims that in making moral judgments speakers attempt to state truths (e.g., that breaking promises is usually wrong) but that the world simply isn't furnished with the properties and relations necessary to render such judgments true. Moral thinking, he argues, probably emerged as a human adaptation, but one whose usefulness derived from its capacity to bolster social cohesion rather than its ability to track truths about the world. This forms the basis of Joyce's 'evolutionary debunking argument, ' according to which evidence that a certain kind of judgment can be explained with no reference to its truth may reveal those judgments to lack warrant. Essays in Moral Skepticism gathers together a dozen of Joyce's most significant papers from the last decade, following the developments in his ideas, presenting responses to critics, and charting his exploration of the complex landscape of modern moral skepticism.u003cbru003e