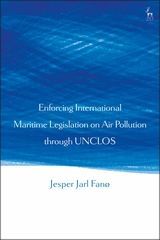 This book explores the scope and applicability of the United Nations Convention on the Law of the Sea (UNCLOS), relating to the enforcement of international maritime legislation on air pollution. It focuses on enforcement of Annex VI of the International Convention for the Prevention of Pollution from Ships (MARPOL Annex VI) and the strengthened global sulphur limit which comes into force in 2020. The first chapters in Part I provide an overall introduction to relevant regulations of MARPOL Annex VI, UNCLOS, Port State Control (PSC), the EU Sulphur Directive and basic jurisdictional principles of international law. Part II analyses the amplified enforcement and notifying obligations of UNCLOS chapter XII placed on flag States and the broadened jurisdictions for port and coastal States to enforce. This includes extraterritorial enforcement by port States on the high seas and how overlapping jurisdictions are resolved. These theoretical discussions on jurisdiction are tied to practical applications pertaining to PSC and sanctioning. Part III builds upon the conclusions of Part II in relation to the enforcement of other legislation adopted by the International Maritime Organization (IMO), including regulations on Greenhouse Gases (GHG) which the IMO is set to adopt through its GHG Strategy. Finally, with the increased environmental challenges relating to global warming, and given the special legal status of ships, Part IV offers an analysis of whether specific IMO regulations on GHG could, in the future, be considered peremptory norms of a 'jus cogens' character, and addresses the potential legal implications.