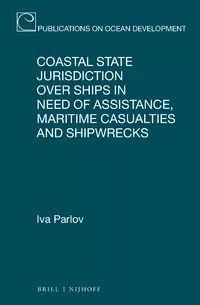 COASTAL STATE JURISDICTION OVER SHIPS IN NEED OF ASSISTANCE, MARITIME CASUALTIES AND SHIPWRECKS

In Coastal State Jurisdiction over Ships in Need of Assistance, Maritime Casualties and Shipwrecks, Iva Parlov offers a comprehensive analysis of the rights and obligations of coastal States over ships in need of assistance, maritime casualties and shipwrecks under international customary law, treaty law and other international instruments. Important regime interactions are discussed in depth, most extensively the interaction between the 1982 United Nations Convention on the Law of the Sea and regulations adopted at the International Maritime Organization, but also between conventional and customary law, public and private law. In contrast to the existing literature that mostly focuses on separate issues such as intervention, places of refuge, salvage and wreck removal, this book takes a systemic approach to consider from the coastal States perspective jurisdictional problems at each stage of a maritime occurrence, deteriorating into a maritime casualty and ultimately into a wreck. Particular attention is given to legal differences associated with maritime zones and the physical state of a ship. Adding a temporal scale to the analysis, the book provides an insight into the legal developments since the Torrey Canyon (1967) disaster and offers some reflections on the directions in which the tide is flowing, not least in light of the recent European Unions proposal for amendments of the IMO Guidelines on Places of Refuge.