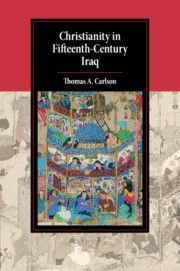 Introduction
1. Coming into focus: the world of fifteenth-century Iraq and al-Jazira
2. Muslim lords and their Christian flocks
3. Living with suspicious neighbors in a violent world
4. Interlude: concepts of communities
5. Bridges and barriers of doctrine
6. Practical theology in a dangerous time
7. Rituals: the texture of belonging
8. Desperate measures: the changing ecclesiastical hierarchy
9. The power of the past: communal history for present needs
Conclusion
Appendix A. Glossary
Appendix B. Lists of rulers and patriarchs
Appendix C. The patriarchal succession of the Church of the East
Appendix D. Dating the ritual for reception of heretics.

Christians in fifteenth-century Iraq and al-Jazira were socially and culturally home in the Middle East, practicing their distinctive religion despite political instability. This insightful book challenges the normative Eurocentrism of scholarship on Christianity and the Islamic exceptionalism of much Middle Eastern history to reveal the often unexpected ways in which inter-religious interactions were peaceful or violent in this region. The multifaceted communal self-concept of the 'Church of the East' (so-called 'Nestorians') reveals cultural integration, with certain distinctive features. The process of patriarchal succession clearly borrowed ideas from surrounding Christian and Muslim groups, while public rituals and communal history reveal specifically Christian responses to concerns shared with Muslim neighbors. Drawing on sources from various languages, including Arabic, Armenian, Persian, and Syriac, this book opens new possibilities for understanding the rich, diverse, and fascinating society and culture that existed in Iraq during this time.