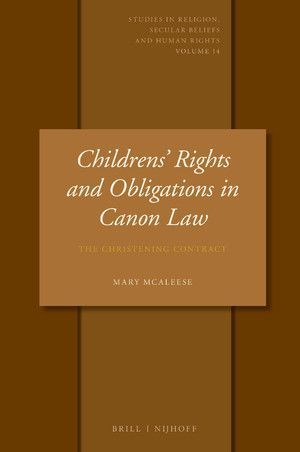 In the first study of its kind Mary McAleese subjects to comprehensive scrutiny the Roman Catholic Churchs 1983 Code of Canon law as it applies to children. The Catholic Church is the worlds largest non-governmental organisation involved in the provision of education and care services to children. It has over three hundred million child members world-wide the vast majority of whom became Church members when they were baptised as infants. Canon law sets out their rights and obligations as members. Children also have rights which are set out in the 1989 United Nations Convention on the Rights of the Child to which the Holy See is State Party. The impact of the Convention on Canon Law is examined in detail and the analysis charts a distinct and worrying sea-change in the attitude of the Holy See to its obligations under the Convention since the clerical sex abuse scandals became a subject of discussion at the Committee on the Rights of the Child, which monitors implementation of the Convention.