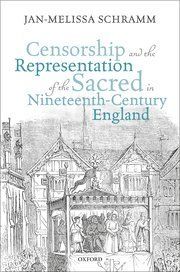 CENSORSHIP AND THE REPRESENTATION OF THE SACRED IN NINETEENTH-CENTURY ENGLAND

Throughout the nineteenth century, the performance of sacred drama on the English public stage was prohibited by law and custom left over from the Reformation: successive Examiners of Plays, under the control of the Lord Chamberlain's Office, censored and suppressed both devotional and blasphemous plays alike. Whilst the Biblical sublime found expression in the visual arts, the epic, and the oratorio, nineteenth-century spoken drama remained secular by force of precedent and law. The maintenance of this ban was underpinned by Protestant anxieties about bodily performance, impersonation, and the power of the image that persisted long after the Reformation, and that were in fact bolstered by the return of Catholicism to public prominence after the passage of the Catholic Relief Act in 1829 and the restoration of the Catholic Archbishoprics in 1850. But even as anti-Catholic prejudice at mid-century reached new heights, the turn towards medievalism in the visual arts, antiquarianism in literary history, and the 'popular' in constitutional reform placed England's pre- Reformation past at the centre of debates about the uses of the public stage and the functions of a truly national drama.