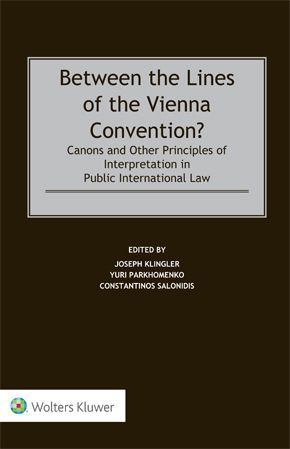 BETWEEN THE LINES OF THE VIENNA CONVENTION?

CANONS AND OTHER PRINCIPLES OF INTERPRETATION IN PUBLIC INTERNATIONAL LAW

Between the Lines of the Vienna Convention? is a uniquely useful handbook that analyses certain particularly recognizable canons and principles of interpretation that are not expressly codified in the Vienna Convention, but that are arguably still authorized between the lines. This volume represents the first modern, freestanding analysis of such canons and principles, their utility in public international law, their role in treaty interpretation and their relationship with the Vienna Convention regime.
Whats in this book:
A top-flight roster of respected scholars and practitioners of public international law offers an in-depth examination of, among other things:
the origins of canons and interpretive principles;
their utility and limits in treaty interpretation; and
the application of numerous individual canons and interpretive principles, including effet utile, expressio unius, lex specialis, ejusdem generis, in dubio mitius, in pari materia, ex abundante cautela, the principles of contemporaneity and evolutive interpretation and more.