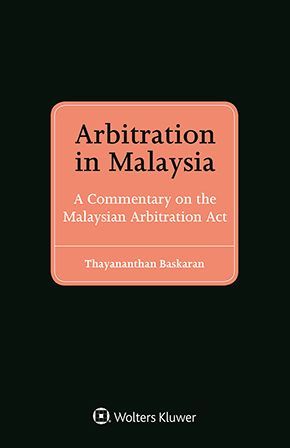 ARBITRATION IN MALAYSIA: A COMMENTARY ON THE MALAYSIAN ARBITRATION ACT

Arbitration in Malaysia is a commentary on the Malaysian Arbitration Act 2005. The commentary follows the Act section by section. In sequential order, it provides the text of a section of the Act, followed by an explanation of the purpose of the section. The commentary then traces the origin of each section of the Act to the Model Law or the statute it is based on, as well as the history of the Model Law or statute. This is followed by an explanation of provisions of each section in terms of their application and effect.

The commentary is primarily based on the interpretation of the Arbitration Act 2005 by the courts of Malaysia in the decade since it has been in force. Where a particular provision of the Act has yet to be interpreted by the courts, reliance is placed on reports of UNCITRAL, commentaries on the Model Law and statutes in other Model Law jurisdictions and the rules of statutory interpretation.

Kuala Lumpur is developing into a regional hub for arbitration. The International Centre for Settlement of Investment Disputes has selected Kuala Lumpur as an alternative venue and the Permanent Court of Arbitration has opened offices there. This book, intended to serve as the primary source of reference for international arbitrations seated in Kuala Lumpur, provides section-by-section commentary in a sequential, in-depth analysis of the Malaysian Arbitration Act 2005, explaining each sections purpose, legal source, application and effect.