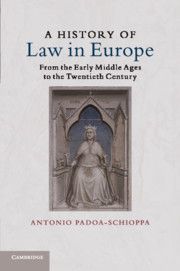 A HISTORY OF LAW IN EUROPE

FROM THE EARLY MIDDLE AGES TO THE TWENTIETH CENTURY

Part I. Late Antiquity to the Early Middle Ages (VXI Century):
1. Law in late antiquity
2. Christianity, Church and law
3. Law of the Germanic Kingdoms
4. The Carolingian and Feudal age
5. Customs and legal culture
6. Church reform
Part II. The Age of the Classical Ius Commune (XIIXV Century):
7. The Glossators and the new legal science
8. Canon law
9. Law and institutions
10. University - students and teachers
11. Legal professions
12. The commentators
13. Particular laws
14. Local laws
15. The legal system of the medieval ius commune
16. English common law - the formative years
Part III. The Early Modern Period (XVIXVIII Century):
17. Churches and states in the age of absolutism
18. Legal humanism
19. Practitioners and professors
20. Legal doctrine and the legal professions
21. Court decisions
22. Local law and royal legislations
23. Natural law
24. Jurists of the eighteenth century
25. The sources of law
26. English law (XVIXVIII century)
Part IV. The Age of Reforms (17501814):
27. The Enlightenment and the law
28. The reforms
29. The French Revolution and the law
30. The Napoleonic era
31. The Codifications
Part V. The Age of Nations (18151914):
32. Law during the Restoration
33. The Historical School and German legal science
34. Late nineteenth-century codes and laws
35. Legal professions
36. Legal science between the nineteenth and the twentieth century
Part VI. The Twentieth Century:
37. Law and legislation between the two World Wars
38. Law in the second half of the twentieth century
39. Some outlines of the new legal culture
40. European Union law
41. Heading towards global law?

With its roots in ancient Greece, Roman law and Christianity, European legal history is the history of a common civilisation. The exchange of legislative models, doctrines and customs within Europe included English common law and has been extensive from the early middle ages to the present time. In this seminal work which spans from the fifth to the twentieth century, Antonio Padoa-Schioppa explores how law was brought to life in the six main phases of European legal history. By analysing a selection of the institutions of private and public law which are most representative of each phase and of each country, he also sheds light on the common features throughout the history of European legal culture. Translated in English for the first time, this new edition has been revised to include the recent developments of the European Union and the legal-historical works of the last decade.