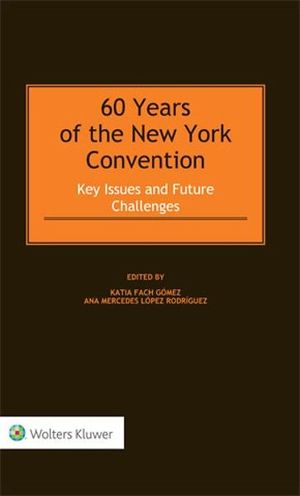 60 Years of the New York Convention addresses a wide range of legal issues related to the application of the New York Convention in the context of international commercial arbitration and international investment arbitration. Worldwide interest in the recognition and enforcement of arbitral awards has never been higher, and the New York Convention of 1958, currently adhered to by 159 States including the major trading nations, remains the most successful treaty in this area of commercial law. This incomparable book, marking the Conventions 60th anniversary, provides a fully updated analysis of the Conventions application from international, comparative, and national perspectives.
Drawing on a global conference held in Seville in April 2018 that was actively supported by UNCITRAL, the books 27 chapters, by highly qualified international practitioners and academics from different jurisdictions, address the subject with critical eyes, well aware of current developments and future challenges in the field of arbitration. Among the issues and topics covered are the following:
-Multi-tiered dispute resolution clauses.
-Applicability of the UN Convention on the Use of Electronic Communications in International Contracts.
-Complexities of enforcing orders determined by software.
-Enforcement of annulled awards.
-European Union law and the New York Convention.
-Enforcing awards against States and State entities.
-Sovereign immunity as a ground to refuse compliance with investor-State awards;
-Enforcement against non-signatories.
-Public policy exception.
-Arbitrating and enforcing foreign awards in specific countries and regions, including China, sub-Saharan Africa, and the ASEAN countries.
There are also a number of fascinating reflections on the future of a convention that is about to welcome its 160th contracting State. Ample reference is made throughout to leading cases and practice.
Familiarity with the intricacies of the New York Convention, as the most universally acknowledged framework in which cross-border economic exchanges can flourish, is essential for judges, practitioners, legal staff, business people, and scholars working with or applying international commercial arbitration anywhere in the world. This books combination of highly thought-provoking topics and the depth with which they are addressed will prove invaluable to all interested parties.